How to make with your own hands?

The board game is designed for the children over 6. Parents and children may have a lot of fun making it and playing together (the construction takes from ten to fifteen minutes).
The handmade game helps children to use small numbers and to train counting skills in the most natural and competitive way.
The game has the game field “OFLAMERON” in the form of closed passes consisting of the value cards such as +1, -1, +2, -2, +3, -3. It adds or subtracts relevant number to/from the player's account. |Z| means that the player's account is cleared (zero).

The more complex the playing field, the more passes and prize cards, the more interest.


To start playing, you need to make cards (you can cut out some small paper rectangles), 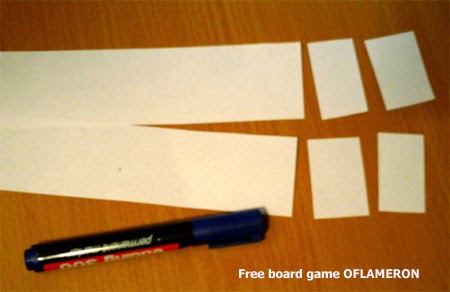 to write values on the cards and to make the playing field consisting of closed passes.
The example of the simpliest playing field is given at 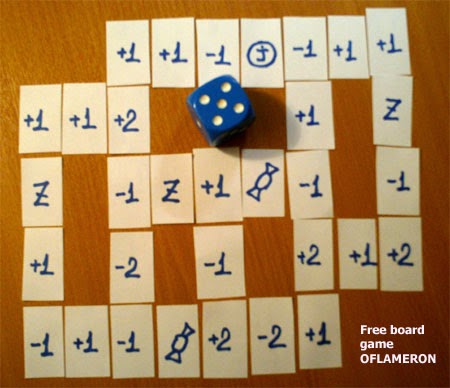 As it is hard for children to count big numbers, add some cards with |Z| (zero) value. To keep children interested, the playing field shall contain some prize cards (Sweet - |C|, Coin - |M| and Joker - |J|). The Joker - is any prize designated before the game. For example, you can give a cinema trip for ten Jokers. 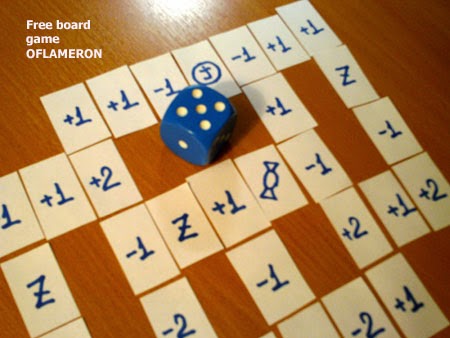 The cards may be cut out of colour paper, cardboard or plastic. You can use computer to make and print the cards. The playing field can be drawn on a plastic board or a big sheet of paper (paper size A3 or A2).

To start the game, you need standard chips and die.
First children should be given a certain beginning small number (1 or 2). Then they put their chips in any cell of the playing field at their discretion (except prize one) and add the cell value to their account. Then children throw the die and move their chips clockwise as many times as they have on the die. The value of the next cell shall be summed up with the player's account (as a counting exercise) provided it is a numerical number.
The |Z| cell is used to reduce big numbers. You should determine how often the cell shall be used. If children count well, you can use cells with big numerical values such as |4|, |5| |6| and add any multiplication and other cards.
Although the game is very simple, the counting training is very effective and interesting and you can play the game at any place.

Posted by bretell at 1:00 PM No comments:

Any table game can be successfully used to learn a foreign language. As an example, we can use the “Oflameron” table game to acquire a good stock of new words. Let us replace the playing field values “Oflameron” with the alphabet of the language we are going to learn (for example, Russian one).

The playing field will look as follows: 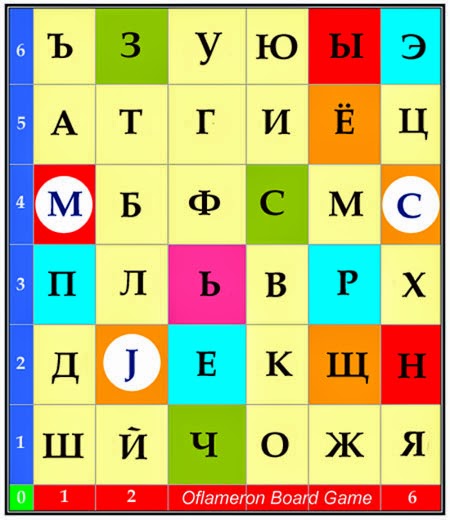 The playing field is a 6x6 standard Word-generated table. The table can be edited to learn any language.
To start the game, you need two dies (here we use red and blue dies). The number of scores shown by the blue die is a vertical coordinate of the cell. The number of scores shown by the red die is a horizontal coordinate of the cell in the playing field “Oflameron”.

The players are given the word which translation into the language they have to spell. To make it, the players alternate in throwing dies and write the words from the playing field cells. The person who will spell the word first wins. The game is for the children of 5 or 6 years old. The children over 6 years can spell several words at once or a phrase or a short sentence.

To make the game more interesting, some cells can be replaced with prize pictures such as a sweet, a coin, a cuter. A cuter |J| is a prize that can be chosen before the game starts. For example, two cuters can be exchanged for one music CD

Posted by bretell at 9:20 AM No comments: