Part 1.
The board game made of paper "OFLAMERON" may be used to learn foreign languages (for example, Spanish or French). The game allows to train one’s vocabulary effectively.     It is possible to lay out the game field of any size and format using playing cards with letters, for example, of the French alphabet. The game field consists of the closed paths. The quantity of paths and the size of the game field may vary. The elementary game field may look as follows: 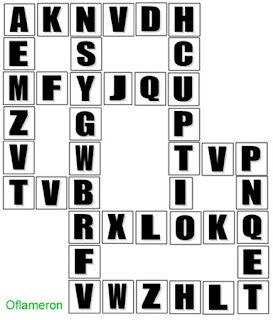 Of course, it is possible to lay out very big and difficult game fields for the game "OFLAMERON". The more cards are used, the more paths the game field has, the more interesting it is to play.
A few pupils aged at least 6-7 may participate in the training game. Usual game pieces and a die shall be required for game.          A TRANSLATION of 10-15 French words is issued to players. Players move their game pieces on cards throwing the die and “collect” the French letters. It is necessary to make any French words of collected letters with the length of 4 letters least including those words the TRANSLATION of which is issued to the players.          Start game          The game begins when participants put their game pieces ON ANY CELLS of the game field and write down the letters occupied by their game pieces on their leaflets. 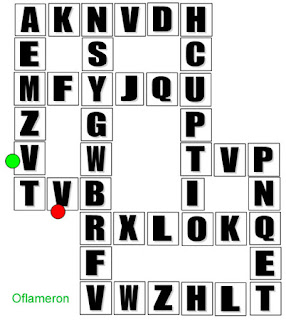 Then players throw in turn the die and move game pieces CLOCKWISE by the number of cells equal to the number on the die. Write down occupied letters on the leaflet and again throw the die and game pieces, etc. If the paths split, the player defines by him(her)self in what direction to continue the movement of the game piece. 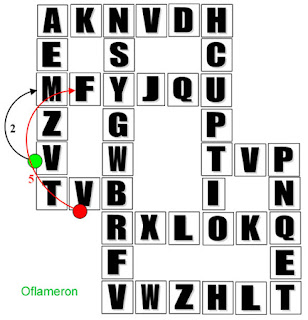 Players collect letters, and at some moment it becomes possible to make a French word of them and to announce its translation. The player receives as many points to his/her score for each made word as many letters contains the French word made. If a player makes a French word but can’t announce its correct translation, the points are received by that participant who announces the word translation correctly. Players make the French words of those letters that were collected by them. The used letters are struck off the player’s list and should be “collected” again.

For example, a player has collected the letters P, X, R, I, M, E, E, L, W, E. The word EXEMPLE (French) was made. After it the player will have letters X, R, I, W only in his/her list.     The players will make and announce many French words and they will be not only those words the TRANSLATION of which was set in the beginning. During the game the participants will make much more words, than was set. If a player makes a French word the TRANSLATION of which was set before the game, then the points received for this word shall be doubled. If a player has made a French word which is the longest in this game session (the current record), then the points received for this word shall be tripled.          The teacher may interfere in the game process. If players cannot collect some letters though they all already know this French word, the teacher may replace some already “collected” French letters on the game field with the required letters taking necessary cards from the pack.          Participants may prompt each other during the game - it helps studying and remembering foreign words.          In total, much more French words shall be made and announced during the game than those 10-15 TRANSLATION words which were set at the beginning.          The game comes to an end when all French words the TRANSLATION of which was set in the beginning are made and announced. The number of points received by every player is counted and the winner is named. If a few players received the same number of points, the one who made the longest word is the winner. If it is not sufficient, the count of the “current records” quantity shall help.          While playing, the participants have to recollect in memory the French words, selecting from them those corresponding to the set of letters available. It ensures high efficiency of training. After several game sessions, the pupils will make phrases in a foreign language much quicker. 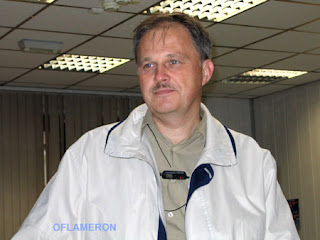