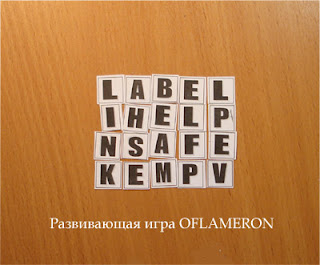 From the cards both horizontally and vertically will make the foreign words. For example, the English word
- HELP
-LABEL
- LINK
- SAFE
- LEAF
The student must be a foreign word and call it a translation. He adds so many points, how many letters in the foreign words.
As the player adds one card to the playing field to get a new number or a string.
The game ends when the student cannot make up a word.
Count the points of players and determine the winner.
(c) by Valery V Shmeleff http://www.oflameron.ru

Of these cards, you can lay out the playing field. 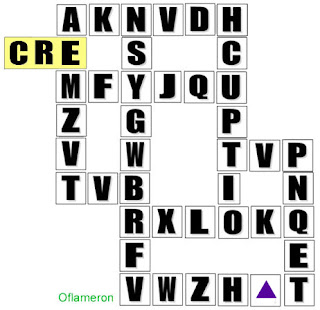 The board game made of paper "OFLAMERON" may be used to learn foreign languages (for example, Spanish or French). The game allows to train one’s vocabulary effectively.
It is possible to lay out the game field of any size and format using playing cards with letters, for example, of the French alphabet. The game field consists of the closed paths. The quantity of paths and the size of the game field may vary. The elementary game field may look as follows:
Of course, it is possible to lay out very big and difficult game fields for the game "OFLAMERON". The more cards are used, the more paths the game field has, the more interesting it is to play.
A few pupils aged at least 6-7 may participate in the training game. Usual game pieces and a die shall be required for game.

The game begins when participants put their game pieces ON ANY CELLS of the game field and write down the letters occupied by their game pieces on their leaflets.
...
Full guide - http://geocities.ws/frenchfree/